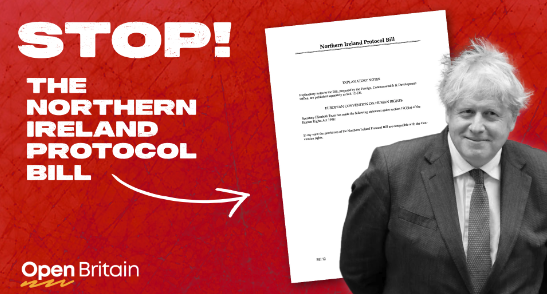 he publication of the Northern Ireland Protocol Bill marks a new low even by this government’s standards.

Most people around me these days don’t know that I was born in the middle of a civil disturbance in 1970s Belfast, or that I spent my early childhood living in an area of Northern Ireland often called ‘Bandit Country’ because of the intensity of the conflict there. They don’t know about the day my young parents returned home to find that our flat and everything in it had been destroyed by a bomb that exploded in the shop below. They have no real feeling for what it was like to begin life in a place where terrorists and bombs and soldiers and guns and armoured cars and military helicopters and vehicle checkpoints are part of everyday life. But I do.

I feel lucky that my parents decided early in my life to move our family to England, to escape the gruesome realities of the troubles and remove any possibility that I might later become enmeshed in them. I also feel lucky that many of my younger relatives still living in Northern Ireland grew up in the days after the Good Friday Agreement, when life was much more normal than anything that existed beforehand. But, in reality, luck has nothing to do with it.

The current peace in Northern Ireland is not down to simple luck. It is the result of a monumental effort by a huge number of people whose vision, courage and tenacity was truly exceptional. And today it seems that that precious peace is being put at risk by a small band of ideologues within our government whose lack of insight, integrity and even basic competence is equally exceptional.

The publication of this long-threatened legislation marks a new low even by this government’s standards. They deny that this bill breaks international law but the majority of external observers, the other party to the Protocol (the EU), and even MPs and former Ministers on the Conservative benches judge that it does. The government’s decision to introduce this legislation not only risks the hard-won peace in Northern Ireland but trashes the UK’s reputation and reduces the likelihood of negotiating beneficial trade deals with countries around the world. And for what? So that Boris Johnson can buy the support of a small clique of hard-line Brexiters who will not accept that Brexit is destroying the social, economic and democratic fabric of our society, and who might otherwise join the rebels who wish to see him removed from office.

What a time to be alive.

The madness of this situation illustrates why Open Britain is pursuing its #StopTheRot campaign. Where rot appears, it spreads and ultimately takes hold. Under Boris Johnson, a particularly damaging form of rot has taken hold of our political system. Johnson and his Vote Leave buddies told lies to secure victory in the Brexit referendum, they doubled-down on those lies in order to win the 2019 general election, and, in government, they have prioritised making increasingly fanciful announcements to give the impression of positive outcomes where none actually exist. When they reach the point at which it becomes painfully obvious that they can’t deliver on their nebulous promises, they tell more lies, claiming that it is all someone else’s fault. If we don’t stop the rot soon, it will kill our democracy.

I hope that one day soon the people of our country will rise up and say they’ve had enough of all the broken promises, the lame excuses and the snake oil. But we’re not there yet. It’s up to us, the people who have already had enough, to make sure that happens as soon as possible. For reasons you now know, Brexit and its impact on Northern Ireland resonate particularly strongly with me. I’ll be doing everything in my power to ensure Open Britain fights this legislation as it makes its way through Parliament. I hope, and believe, that you all will too.

SIGN THE PETITION AND TELL BORIS WHAT YOU THINK